As the Tianwen-1 spacecraft is scheduled for launch in late July or early August, the mission chief scientist and his team provide an overview focusing on the scientific objectives and instrumentation of China’s first Mars mission.

Among the eight planets in the Solar System, Mars is the most similar to Earth and is also close by. It therefore naturally becomes a high-priority target for space exploration. Mars offers a substantial and pragmatic opportunity to answer key questions concerning the existence of extraterrestrial life, and the origin and evolution of the Solar System, and to explore the possibility of human habitation. From the first space probes to fly by the planet in the 1960s to the planetary orbiters and rovers of today, the United States, Russia, Europe, Japan and India have developed Mars exploration programmes to fulfil human aspirations.

China announced its planetary exploration programme beyond the Earth–Moon system in 20161. Benefiting from the engineering heritage of China’s lunar exploration programme2, the Chinese national strategy set Mars as the next target for planetary exploration. China’s first Mars mission is named Tianwen-1, and aims to complete orbiting, landing and roving in one mission3. The name means ‘questions to heaven’, taken from the name of a poem by Qu Yuan (about 340–278 bc), one of the greatest poets in ancient China. Tianwen-1 is currently on track for a July or August 2020 launch, with arrival at Mars seven months later (Fig. 1). 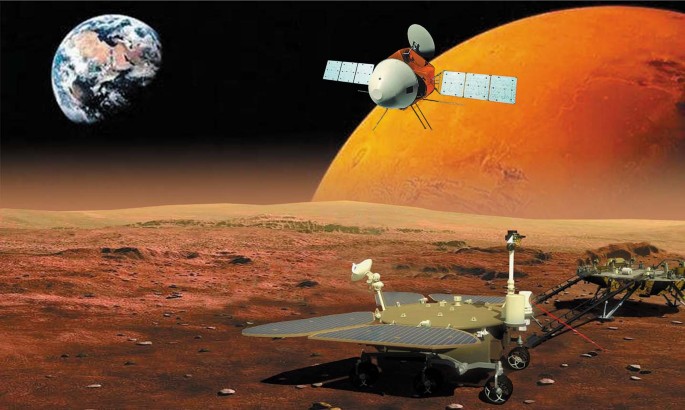 The mission will study the Red Planet with a combination of orbiter and lander/rover.

The spacecraft will be launched at the Wenchang Satellite Launch Center on Hainan Island4 and ejected directly into the Earth–Mars transfer orbit using the Long March 5 launch vehicle. The Tianwen-1 probe, with a mass (including fuel) of about 5 tonnes, comprises an orbiter and a lander/rover composite. The orbiter will provide a relay communication link to the rover, while performing its own scientific observations for one Martian year. The orbit during the scientific observation stage is a polar elliptical orbit (265 km × 12,000 km). The lander/rover will perform a soft landing on the Martian surface some 2–3 months after arrival of the spacecraft, with a candidate landing site in Utopia Planitia. The ~240 kg solar-powered rover is nearly twice the mass of China’s Yutu lunar rovers, and is expected to be in operation for about 90 Martian days.

The main task of Tianwen-1 is to perform a global and extensive survey of the entire planet using the orbiter, and to send the rover to surface locations of scientific interests to conduct detailed investigations with high accuracy and resolution. Specifically, the scientific objectives of Tianwen-1 include5: (1) to map the morphology and geological structure, (2) to investigate the surface soil characteristics and water-ice distribution, (3) to analyse the surface material composition, (4) to measure the ionosphere and the characteristics of the Martian climate and environment at the surface, and (5) to perceive the physical fields (electromagnetic, gravitational) and internal structure of Mars.

Tianwen-1 is going to orbit, land and release a rover all on the very first try, and coordinate observations with an orbiter. No planetary missions have ever been implemented in this way. If successful, it would signify a major technical breakthrough. Scientifically, Tianwen-1 is the most comprehensive mission to investigate the Martian morphology, geology, mineralogy, space environment, and soil and water-ice distribution. The Tianwen-1 probe is expected to reach Mars around February 2021 and the scientific observation phase will start in April 2021. In addition to Tianwen-1, NASA’s Mars 2020 Perseverance rover and the United Arab Emirates’ Hope Mars orbiter will also make the journey to Mars. The international planetary science community looks forward to these exciting missions, which will certainly advance our knowledge of Mars to an unprecedented level.

allaboutianthe open online profile for all